Good thing I was wearing my Snell rated full-face Shoei R1200 helmet the evening I went down rather than the DOT Bell helmet shown here. My surgeon told my brother Barry that rather than being up in surgery for 10 hours, since I was an organ donor, they would have been “parting me out.” “God Shot” So if you do ride or ride on the back of a bike please remember this as lots of damage done without full face Snell rated helmets. Usually Shoei or Aria, if Snell rated they actually do safety testing to confirm quality of keeping your brains from getting rattled. 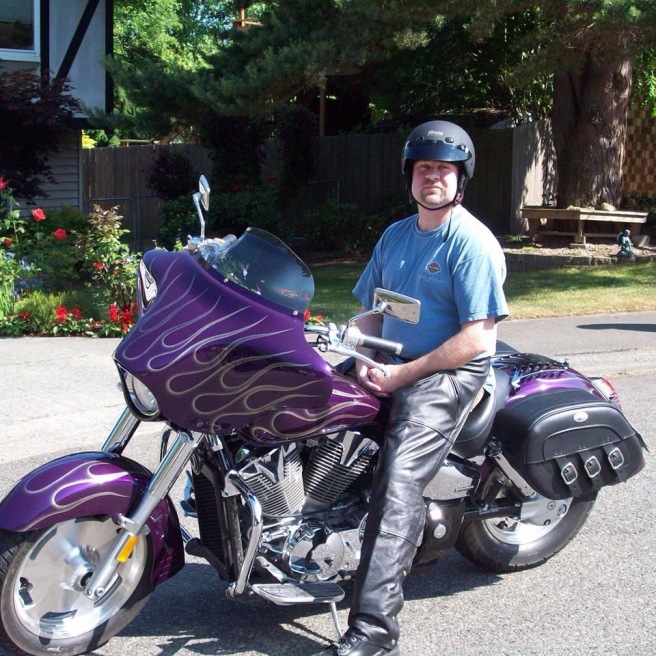 Notice that shirt on the wall says “Firefighters Kick Ash” I purchased this at a fund raiser for firefighters the year before and was the actualq shirt I was wearing underneath my leather jacket the night I crashed. Notice they cut this off of me on Friday, September 7, 2012.

I had been a volunteer firefighter 21 years earlier. To get to the “God Shots” I was talking about, the guy who called 9-1-1 was Vladimir, who knew my older son Ben and was going to meet up with Ben’s good friend Alex Prokopchik. On top  of that, Vladimir’s friend who was driving saw my bike down the road but did not want to stop, Vladimir said he saw me on the rail and said Stop, I see him on the guard rail, and even jumped out to call 9-1-1 even before the car stopped.

He tells me I took my helmet off and said, “Help, help, my name is Andy, help me.” Of course I don’t remember this, thank God…probably in lots of pain as I had seen years earlier when responding to motor vehicle accidents, people in traumatic shock, spared pain you think they should be feeling.

Battalion Chief of Station #62, Dave Mataftin, was first to respond. “God shot“, he was a resident at Station #26 in Des Moines Washington, back in 1990 – 91. I was born in 1962 with my mother born in 1926, “God Shot” so that I would know His hand was in this and I am alive for a purpose as He is not done with me yet!
(Dave Mataftin, Batillion Chief Station #62 South King County he is in white shirt center behind Terri with black hair. I had served as a volunteer firefighter in Des Moines Station #26.)

Russian boy, Vladimir, asked 9-1-1 operator if they should do CPR as I appeared to be going unconscious. They told him to wait for firefighters to show up. Moving me may break my back if not already broken. I stopped breathing and when Dave showed up, he had boys help take me off guardrail, if I was not breathing it really would not matter so much about back as brain damage occurs when not breathing, so they took me off guardrail and I began to spontaneously breathe “God Shot.” When they laid me flat and then later put me on Medic One unit I was blessed with unit respirator, technology has come a LONG way with improvements in the past 21 years! They put me on respirator which kept me breathing and even put a trachea tube in to keep airway open and breathing, another “God Shot.” Also, heart monitor with defibrillator/afibrulator on aboard, they were able to provide atrialfibrulation on way to hospital and once at the hospital. “God Shot,” 34 broken bones. Right femur, hardest bone in the body to break, was snapped so that right foot was up by my right ear as I tried to pull myself off guardrail. Is amazing when you look at X-rays as Titanium rod looks like shock absorber in my leg with Tibia and Fibril bones broken with titanium replacement parts in, Pelvis broken and bolt going across from left side to center with a scar marking the midpoint of my abdomen with eight titanium screws, 4 on each side of my butt, to help hold pelvis together for healing and screws for my radius and ulna are used to attach them to my left humerus which broke. My shoulders were fractured with my left collar bone broke at the sternum, and 7 ribs (4 on left side 3 on right, I think) 4 vertebrae T5 – T8 which are held together by a plate in my back with injury is rated as T9 in “doctor speak.” They put me in traction at Harborview Hospital and stabilized back and then went to work on my pelvis. Technology and skill and wisdom of Harborview Red Team another definite “God Shot.”
(Here I am in ICU at Harborview.)

When Vladimir gets to Redondo to meet up with friends, he apologizes for being late and explains they were delayed calling 9-1-1 as a guy on a purple bike crashed on Dashpointe road. Alex says “Did you get his name? Ya some guy Andrew Foss”, he replies. “That’s Ben’s DAD!” Alex then calls Ben who is working at Safeway “throwing freight” with his phone off as busy at work. Alex leaves voice message “God Shot.” He then calls my son Dan who did not want to go to Al-Anon meeting and was at my apartment “God Shot.” He then picks up Dan and takes him to St Francis Hospital in Federal Way where they are told, no for something that serious you need to go to Harborview Hospital and Alex then takes Dan all the way up to Seattle about 40 miles one way to the hospital “God Shot.” They then text my former wife, Shannon, and she heads up to be there for both Dan and I “God shot.”

Ben finally gets message just before end of shift and lets his boss know and asked if he could leave early to head to Harborview, of course “God Shot.” Ben is 18 years old at the time and as adult closest relative, gets to go through doctor speak regarding me and anticipated procedures to be performed, “God Shot“, which he handles quite well I am told. He then gets to sign for permission for elected procedures “God Shot.” I, of course, now get to tease him, that since he signed for it, he gets to pay for it! Right?

Ben remembers many of the specifics that I would not know for weeks and weeks as I barely remember being in Harborview Hospital even though there for almost 3 weeks or so, I believe. I was then transferred to Regional hospital where we worked getting breathing tube removed from trachea and began some physical therapy. “God Shot”

Can get around pretty well, but would like to continue improving muscle memory with Eksoskeleton! ⚡😇😊🤙🏽